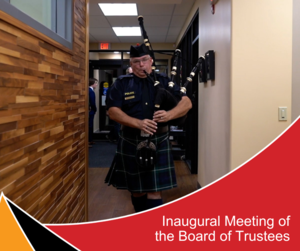 The District School Board Ontario North East (DSB1) inaugural meeting of the Board of Trustees occurred on Tuesday, November 15, 2022. The meeting, which took place at the Schumacher Board Office, began with a procession into the board room led by Trustee Meunier who provided a bagpipe entrance.
In the procession, Trustee Meunier was closely followed by six other elected Trustees, two of three acclaimed Trustees, and the Indigenous Trustee. Among the Trustees were two Student Trustees in attendance.
The newly assembled Board of Trustees comprises Trustee Brush, Trustee Meunier, Trustee Pochopsky, and Trustee Pye-Reasbeck who have been re-elected to their position. This is in addition to Trustee Draves, Trustee Peever, and Trustee Wiwchar who are acclaimed and join the Board of Trustees for another term. Trustee Archibald, nominated for the position of Indigenous Trustee, will continue to serve for another term. Newly elected to the Board of Trustees is Trustee Byer representing Englehart, and Trustee Hewey representing Timmins, Foleyet, and Gogama.
Following the call to order and territorial acknowledgment, the inaugural meeting began with the Trustee Swearing In Ceremony performed by the Honourable Judge Carr, who administered the Declaration of Office and the Oath of Allegiance to all Trustees. The Trustee Swearing In Ceremony was proceeded by the Chair and Vice-Chair election for the 2022-2023 term, where Trustee Brush serves as the acclaimed Chair of the Board and Trustee Draves serves as the re-elected Vice-Chair of the Board.
The Board of Trustees is currently comprised of 9 elected Trustees, one Indigenous Trustee, and three Student Trustees. DSB1 and the Board of Trustees are seeking to fill the final vacant Trustee position for the Temiskaming Shores, Temagami, Elk Lake, and area. For more information and to apply, view the Public School Board Trustee Position.